Every Fibre of my Being

Laura Ellen Bacon was born in 1976 and lives and works in Derbyshire (England). She holds a degree in Applied Arts from the University of Derby and was shortlisted for the Woman’s Hour Craft Prize (V&A, London). Twenty years ago, she discovered willow. Woven and knotted, it has become the starting material for large-scale works, sculptures, and even semi-architectural installations designed and created by the artist in situ (Winchester Discovery Centre, Saatchi Gallery, Barrington Court, Chatsworth Garden, Sudeley Castle, etc.). At times compact, nestling in the corner of a room and catching visitors by surprise, sometimes proliferating and embracing, her artworks have the creative power of natural phenomena. As part of the land art movement, the works blend in with the vegetal surroundings or cling to the mouldings of an edifice like the ligneous branches of a climbing plant.

Laura Ellen Bacon spent six weeks in residence at the Abbaye de Maubuisson, which is located one hour outside Paris, France, to produce two installations, Breathe and The Feeling Remains. The first, Breathe, unfurls its volutes of plant fibres in the visiting parlour. Connected together by hundreds of knots, the willow stems trace aerial curlicues that seem to be trying to escape through the door and the windows. The piece enfolds visitors in its wide-open curves. The discreet fragrance of the willow and its imperceptible rustling awaken the senses. In this room, the only one where nuns were allowed to speak, the stems rise up like the words exchanged by the women. All these shared conversations, questions, injunctions, whispers, breaths, cross time in the same way as the room itself, before eventually evaporating and fading away. Locked inside the memory of the walls, the words materialize in the flexibility of the willow and break free along its meanders. Spirals and scrolls intertwine with the pillars and the gothic vaults of the room. These interlacing patterns conjure up a complete vocabulary of the garden and botany that visitors can connect with at will: trellises, tendrils, branches, vines, vine shoots. A network of shadows surrounds the stems, fluttering on the walls. Light – an intrinsic component of the installation – slithers between the stems, bringing them to life and revealing their particular vibration. The artist, as she explains it, creates her sculptures with these stems, rekindling the imagination of the den, the burrow, and the nest. Having been invited to create a piece in a specific space, she uses these fibrous sticks to translate the strong connection she feels with the location and the flow of energy between herself and the site.

In the nuns’ room, the sculpture entitled The Feeling Remains stands out through its density and tightly woven branches and stems. As though embedded in the bowels of the building, the work rises from its foundations. Solid, powerful, it emerges in two halves, abstractly evoking the silhouette of invisible beings. While the artist draws her inspiration from natural shapes, she also strives to give substance to the memories of the nuns. Hidden in its recesses, lights give life to the artwork. They give it a vivid presence: the lingering traces of these women who passed through the abbey from one generation to the next. 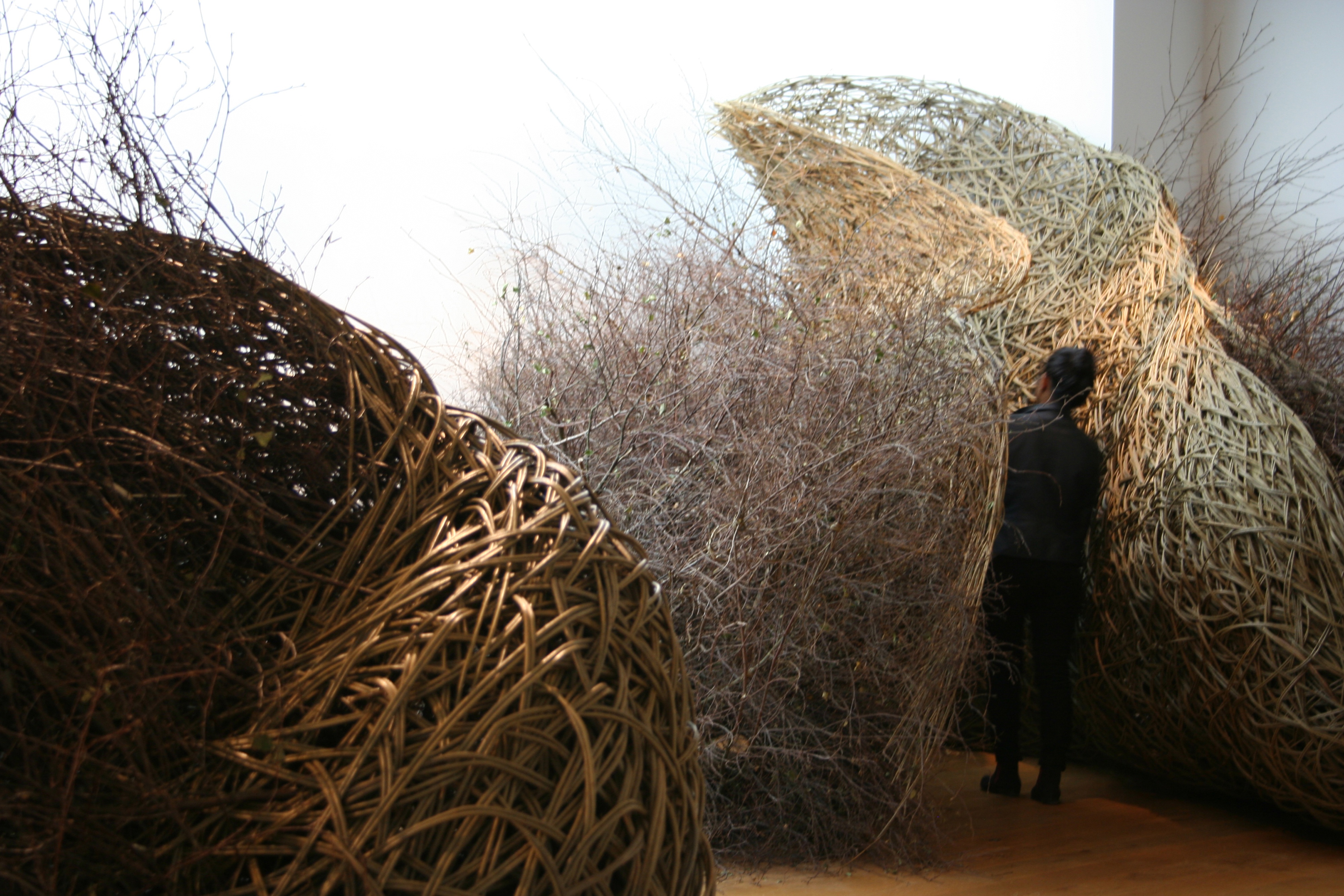 It is worth remembering that these women used to do needlework in this room. The time-consuming, meticulous, diligent task executed in silence and concentration, along with the lengths of thread employed and the hand progressing over the needlework find a new incarnation in the mass of tightly wound stems that spread and grow in the space. Through this very gesture, the artist has revived the nun’s austere activity. Taking a stem, twisting it, weaving it with the others before starting again: the repetitive movement recreates the meditative tension that once guided their work. The nuns’ thoughts appear in the intertwining threads, bound together by the stitches and knots of the structure. They remain unspoken, forming compact nests of darkness, like those left dark by the lighting of the sculpture, as they expand in silence. The words withheld sink into the ground, elongate towards the ceiling, and become gnarled branches.

To complement the willow sculptures, the artist produced a series of charcoal drawings (charred willow sticks). Here again, a repetitive gesture dominates the execution. The broad crosshatching in abstract, plant-inspired forms evokes the marks left over time on the stone wall of the latrines and antechamber where they are on display. The shape of the paper itself wavers, as free as the woven willow, suggesting the water that flows under the latrines’ floor. Water, albeit underground, pervades the entire oeuvre of Laura Ellen Bacon: indispensable to the life of the willow, and subsequently essential to soak the sticks, water affects the flexibility and pliability of the vegetal silhouettes that move through the space. Resilient and transient – like the sculptures destined to revert to nature once the exhibition is over – water embodies the time in which the steady flow of actions and the relentless thrust of forms occur.

In this regard, the works of Laura Ellen Bacon bring more to the site than a wealth of vegetal imagery. Bacon’s work also acts as a catalyst as it reinforces the architecture with its own exuberance and rustles like water, thus resurrecting the forgotten words of the nuns.